Chiranjeevi’s upcoming Telugu language political action drama movie, Mohan Raja is the director of the movie. Nayanthara plays a female lead. Thaman S is composing the music for the movie. The producers are Ram Charan and R. B. Chowdary under the Konidela Production Company and Super Good Films. Smt. Surekha Konidela is the presenter of the movie. Here get the details about the God Father movie news and updates.

Bollywood superstar Salman Khan is playing a vital role, while Nayanthara saw a crucial role. Puri Jagannadh and Satyadev Kancharana are the other key roles. GodFather is the Telugu remake of the Malayalam blockbuster Lucifer starring Mohanlal in the lead role. The movie marked the directorial debut of Prithviraj. He also played a supporting role in the movie.

Megastar Chiranjeevi starrer GodFather is one of the most awaited films this year and its first look was unveiled by the makers on Monday, July 4. The first poster as well as an intriguing clip was shared by the Konidela Production Company, established by Chiranjeevi’s son Ram Charan, on its social media handles. 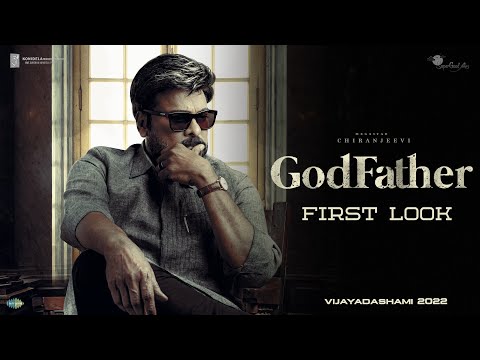 The glimpse to introduce Chiranjeevi’s character is impressive. While thousands of party workers wait for him outside the office, Megastar Chiranjeevi arrives in an ambassador car and as it stops Sunil opens the door for him. Finally, Chiru comes out of the car and walks into the office ferociously. The title Godfather suits well for his persona and the character and the elevations are strikingly remarkable with wonderful BGM from SS Thaman. Masses will have feast to see Chiranjeevi in this get-up.

Konidela Production Company released the motion poster of God Father Movie on the part to the occasion of Megastar Chiranjeevi Birthday. The poster just opens the Movie title. For this movie, Thaman composed the music and Thaman recently confirmed the news about Chiranjeevi and Salmaan Khan’s duo song.

Chiranjeevi looks intense in the first look poster. Sitting in a chair, he seen thinking seriously about something. He sports grey hair which is first time for the megastar. In this video, Chiranjeevi is given God-level elevations, as he enters the office in an ambassador car, while a there huge crowd outside the office. Chiru gives a serious expression, before entering the office. The video is mass-appealing with Chiru’s charisma and Thaman mark BGM.