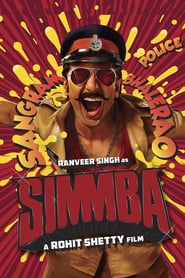 Simmba is a 2018 Indian Hindi-language action drama film directed by Rohit Shetty and written by Yunus Sajawal and Sajid-Farhad. A spin-off of the Singham franchise the film was produced by Shetty under his banner Rohit Shetty Pictures and Karan Johar, Hiroo Yash Johar, and Apoorva Mehta via Dharma Productions. Reliance Entertainment also co-produced and distributed the film. Simmba stars Ranveer Singh, Sara Ali Khan, and Sonu Sood, with Ajay Devgn reprising his role of Bajirao Singham in an extended cameo role. Simmba was released in Bollywood on 28 Dec 2018

Simmba, Ranveer Singh as the corrupt police officer is in top form in this massy entertainer. Right from the first scene he captivates your senses with his disarming charm, even when he’s not doing the right thing. Ranveer lives the character of Simmba with zest and aplomb, aided by massy wisecracks in an endearing Marathi accent that will make you chuckle. But as the film gets progressively serious, his easy banter turns into the tough talk for the bad guys, topped with solid action and emotion