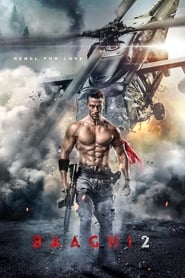 If you are an Action movie fan then Baaghi 2 is one of the movies that you should watch. Baaghi 2 features Tiger Shroff in the lead role and this movie is one of his highest grossing movies. Baagi 2 is a story about a young man who is on a mission to find her friend’s daughter. In the movie, we see some amazing action scenes on how Tiger fight a whole army alone. This movie is a perfect action thriller and one of the highest grossing Bollywood movies of 2018.

Baaghi 2 is one of the most successful movies of 2018. All the action stunts in Baaghi 2 is done by Tiger Shroff. During the human shield scene Tiger Shroff has gone through a major injury.

Baaghi 2 is one of the highest grossing Bollywood movies of 2018. It was made with a budget of 59 Cr and has grossed 253 Cr in Box Office Collection. As per Movie-Rater HOFS ratio, Baaghi 2 has scored 4.3, which is considered a super hit movie.

Baaghi 2 is the 1st Sequel of Baahi and the movie is one of the highest grossing movies of 2018. The movie has an amazing story about how a college couple meets after a long time. Disha Patani, who is playing Neha’s character comes to Tiger to ask him to help find her daughter. During this Tiger goes through a lot of difficulties and finally end up fighting to the person he admired the most. Baahi 2 has an amazing story and the best part is that the movie has some amazing suspense. The first part of the movie is just the buildup, but the 2nd part of the movie takes the turn and the actual action starts. Overall the movie was loved by the audience and one major reason is Tiger Shroff’s action and seeing the real-life couple in Big Cinema.