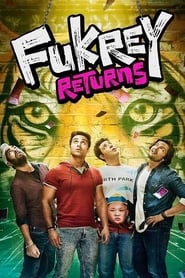 Fukrey Return is one of the best comedy Bollywood movies of all time. The film is directed by Mrighdeep Singh and produced by Farhan Akhtar under the banner of zee studios. Fukrey Return starring Pulkit Sharma, Varun Sharma, Ali Fazal, Manjot Singh, Richa Chadda, Priya Anand, Vishaka Singh, and Pankaj Tripathi. After receiving a huge success in the first part, Fukrey, there was a huge craze seen among the people.

Fukrey Returns is one of the most successful comedy Bollywood movies. This movie was made with a budget of 22 Cr and has already crossed 88 Cr in the Box Office Collection. As per Movie-Rater HOFS ratio, Fukrey Returns scores 4.5 which is considered to be a super hit movie.

Fukrey Returns is one of the best comedy movies in the Bollywood Industry. This movie has received a great response from the audience. Fukrey Returns is the 1st sequel of Fukrey and it continues the story after Bholi Punjaban comes out of jail. The story is quite interesting and we see how Chucha and his friends get into huge trouble. Fukrey Returns is known for the comedy scenes and timing. The first part was so loved by the audience that, this was remade due to public response.